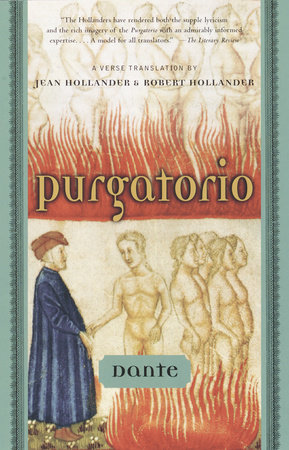 To run its course through smoother water
the small bark of my wit now hoists its sail,
leaving that cruel sea behind.


Now I shall singe the second kingdom,
there where the soul of man is cleansed,
made worthy to ascend to Heaven.
–Purgatorio Canto 1. 1-6

Bend, bend your knees! Behold
the angel of the Lord and fold your hands in prayer.
From now on you shall see such ministers as these.
–Purgatorio Canto 2. 28-30

O pure and noble conscience,
how bitter is the sting of your least fault!
–Purgatorio Canto 3. 8-9

Foolish is he who hopes that with our reason
we can trace the infinite path
taken by one Substance in three Persons.
–Purgatorio Canto 3. 34-36

Horrible were my sins,
but Infinite Goodness with wide-open arms
receives whoever turns to it.
–Purgatorio Canto 3. 121-123

By such a curse as theirs none is so lost
that the eternal Love cannot return
as long as hope maintains a thread of green.
–Purgatorio Canto 3. 133-135

I must wait outside as long as in my lifetime
the heavens wheeled around me
while I put off my sighs of penance to the end,


unless I'm helped by prayers that
rise from a heart that lives in grace
–Purgatorio Canto 4. 130-135

For any man who lets one thought—
and then another—take him over
will soon lose track of his first goal
–Purgatorio Canto 5. 16-18

How many times within your memory
have you changed laws, coinage, offices,
as well as customs, and renewed your members!
–Purgatorio Canto 6. 145-147

But see, already day is waning
and we may not ascend by night.
Now is the time to choose a resting place
–Purgatorio Canto 7. x-x

Reference to the Salve Regina in line 84

To my own I bore the love that here is purified
–Purgatorio Canto 8. 120

At that we moved ahead. The first step
was of clear white marble, so polished
that my image was reflected in true likeness.
The second was darker than the deepest purple,
of unhewn stone, looking as if it had been burned,
cracked through its length and breadth.
The third, resting its heavy mass above,
seemed to me porphyry, as flaming red
as blood that spurs out from a vein.
–Purgatorio Canto 9. 94-102

Devoutly I cast myself down at his holy feet.
I begged him for mercy and to let me enter,
but first, three times, I smote my breast.
With the point of his sword he traced seven P's
upon my forehead, then said: 'Once you are inside,
see that you wash away these wounds.'
–Purgatorio Canto 9. 109-114

Dante says a lot that is consistent with the Church's teaching, but we can't always take him at face value: Hollander notes that "we should not be surprised to find that this poet remakes any text or any doctrine to his own liking and for his own reasons" (201).

One would have sworn he was saying: 'Ave,'
for she as well was pictured there
who turned the key to love on high.
–Purgatorio Canto 10. 40-42

There the humble psalmist leaped in dance
before the blessèd vessel with his robe hitched up—
and was at once both more and less than king.
–Purgatorio Canto 10. 64-66

Our Father, who are in Heaven,
circumscribed only by the greater love
you have for your first works on high,

praised be your name and power
by every creature, as is fitting
to render thanks for your sweet breath.

May the peace of your kingdom come to us,
for we cannot attain it of ourselves
if it come not, for all our striving.

As your angels make sacrifice to you
of their free wills, singing hosanna,
so let men make an offering of theirs.

Give us this day the daily manna
without which he who labors to advance goes backward through this bitter wilderness.

And, as we forgive those who have wronged us,
do you forgive us in your loving kindness—
measure us not as we deserve.

Do not put to proof our powers,
which yield so lightly to the ancient foe,
but deliver us from him who tempts them.

By stairs that were constructed in a time
when registers and measures could be trusted
–Purgatorio Canto 12. 104-105

And the good master said: 'This circle
scourges the sin of envy, and thus
the cords of the scourge are drawn from love.'
–Purgatorio Canto 13. 37-39

All flee from virtue as if it were a snake
–Purgatorio Canto 14. 37

But if love for the highest sphere
could turn your longings toward heavenly things,
then fear of sharing would pass from your hearts.
–Purgatorio Canto 15. 52-54

That infinite and ineffable Good,
which dwells on high, speeds toward love
as a ray of sunlight to a shining body.

It returns the love it finds in equal measure,
so that, if more of ardor is extended,
eternal Goodness will augment Its own.

And the more souls there are who love on high,
the more there is to love, the more of loving,
for like a mirror each returns to the other.
–Purgatorio Canto 15. 67-75

O creature who purify yourself
to return in beauty to the One who made you.
–Purgatorio Canto 16. 31-32

The world is barren now
of every virtue, as you state,
and heavy with and overgrown by evil.
–Purgatorio Canto 16. 58-60

The natural is always without error,
but the other may err in its chosen goal
or through excessive or deficient vigor.
–Purgatorio Canto 17. 94-96

The mind, disposed to love at its creation,
is readily moved toward anything that pleases
as soon as by that pleasure it is roused to act.
–Purgatorio Canto 18. 19-21

Straighten your legs, stand up, brother,
he replied, make no mistake. I am a fellow-servant
with you, and with the others, of a single Power.
–Purgatorio Canto 19. 133-135

you chose poverty with virtue
rather than possess great wealth in wickedness
–Purgatorio Canto 20. 26-27

Revealed himself to two He walked with on the road
–Purgatorio Canto 21. 7-9

Then I learned that we can spread
our winds too wide with spending hands,
and I repented that and other sins
–Purgatorio Canto 22. 43-45

Through you I was a poet, through you a Christian
–Purgatorio Canto 22. 73

For the time we are allowed
should be apportioned to a better use
–Purgatorio Canto 23. 5-6

All these people who weep while they are singing
followed their appetites beyond all measure,
and here regain, in thirst and hunger, holiness.
–Purgatorio Canto 23. 64-66

With the blood from His Own veins He made us free
–Purgatorio Canto 23. 75

Hearing sins of gluttony
that long ago received their wretched wages.
–Purgatorio Canto 24. 128-129

Blessed are they
whom grace so much enlightens that appetite
fills not their breasts with gross desires,
but leaves them hungering for what is just.
–Purgatorio Canto 24. 151-154

Then they again began to sing,
calling on wives and husbands who were chaste,
even as virtue and matrimony urge.
–Purgatorio Canto 25. 133-135

Blessed are you, who, to die a better death,
there take on board the knowledge that you gain.
–Purgatorio Canto 26. 74-75

Having lost the obscuring mantle of sin (614):

Only a small space could be seen beyond them,
but in that space I saw the stars
bigger and brighter than usually they are.
–Purgatorio Canto 27. 88-90

Desire upon desire so seized me to ascend
that with every step
I felt that I was growing wings for flight.
–Purgatorio Canto 27. 121-123

And you should know the holy ground
on which you stand is filled with every kind of seed
and gives forth fruit that is not plucked on earth.
–Purgatorio Canto 28. 118-120

Then I saw people, clad in white, who followed,
as though led by the lights, their garments
of a whiteness never seen on earth.
–Purgatorio Canto 29. 64-66

As quickly as from their graves at the last trumpet
the blessèd shall arise, their voices
rejoined to flesh in joyous Hallelujahs
–Purgatorio Canto 30. 13-15

But when a man's own blushing cheek reveals
the condemnation of his sin, in our high court
the grindstone dulls the sharp edge of the sword
–Purgatorio Canto 31. 40-42


Such knowledge of my fault was gnawing at my heart
that I was overcome, and what I then became
she knows who was the reason for my state.


Then, when my heart restored my vital signs,
I saw the lady i first found alone above me,
saying: 'Hold on to me and hold me fast!'
–Purgatorio Canto 31. 85-93

As, when brought to see the blossoms on the apple-tree
that makes the angels hungry for its fruit
and celebrates perpetual marriage-feasts in Heaven.
–Purgatorio Canto 32. 73-75

see that your way is as far from God's
as that highest heaven, which spins the fastest,
is distant from the earth
–Purgatorio Canto 33. 88-90

From those most holy waters
I came away remade, as are new plants
renewed with new-sprung leaves,
pure and prepared to rise up to the stars.
–Purgatorio Canto 33. 142-145