When Money Dies: The Nightmare of Deficit Spending, Devaluation, and Hyperinflation in Weimar Germany by Adam Fergusson 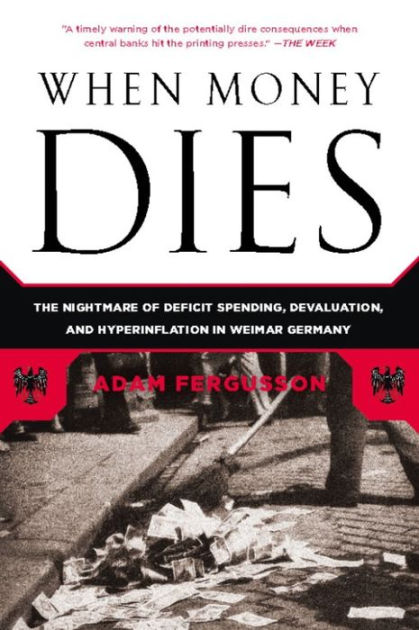 This is a moral tale. It goes far to prove the revolutionary axiom that if you wish to destroy a nation you must first corrupt its currency. Thus must sound money be the first bastion of society's defense. (xiv)

The history of hyperinflation in Weimar Germany is packed with lessons for us today. The central idiot-villain is Rudolf Havenstein who as head of the autonomous Reichsbank, and dismissing any quantitative theory of money, turned and kept the printing presses on full tilt and sent the currency into a nosedive.

Inflation is not the only part of the story, but does indeed play a central role in the fate of Germany—and by unfortunate extension the fate of the rest of the world. There are other causes and roots of decay in the turmoil of World War I. And there are other villains: Ludendorff the militaristic reactionary, Stinnes the plutocratic profiteer, Raymond Poincaré the vengeful victor, and of course Hitler the power-hungry demagogue. These are moderated by Lord D'Abernon's British voice of reason, and Hjalmar Schacht's stabilizing reforms.

In many ways World War I and World War II were part of the same unresolved conflict, and Germany's inflation is a chain that binds them together. Indeed it is difficult to imagine the the rise of Hitler and the Holocaust in an alternate history with sound money and reasonable monetary policy. Inflation aggravates all evils and is a principal agent of moral decay.

When reading about Chamberlain in 2020-10-19-Defender of the Realm it is difficult to not feel a great sadness at how easily the calamity of World War II could have been averted. One leaves a reading of When Money Dies with a similar feeling about Havenstein's monetary policy and Poincaré's vengeance.

Summary: The German hyperinflation of 1923 brought great suffering, and had its roots in the monetary policy of Karl Helfferich going back to start of war in 1914.

Summary: The inflation and suffering in Austria—as told by the film "The Joyless Street" and the diary of Anna Eisenmenger—foreshadowed that to come in Germany. Some of the quotes from her diary sound eerily similar to things I hear today in 2021.

Summary: Germany's economy was in dire straights in 1920/21 as it struggled with massive debt, rising prices, and huge reparations payments it would never be able to make except at a level of taxation leading to revolution, all under threat of sanctions or occupation.

Summary: The mark started to lose value as the government was squeezed by reparations bills, unable to tax, and overpowered by the industrial lobby, and assassinations led to further loss in confidence. Germans speculated in foreign currency, moved their capital out of the country to avoid taxation, and rushed to buy goods before prices rose or stocks were depleted. This fueled animosity toward those who profited from the situation, and inevitably the Jews.

Chapter 5: The Slide to Hyperinflation

Summary: Hyperinflation (50% in a month, or 600% annualized) arrived in mid-1922 and brought social unrest, moral degradation, and fear.

Summary: German leadership was blind and ignorant at the impact of monetary inflation on the economic collapse. The speed of inflation caused prices to go up before monthly wages could be adjusted. And the holocaust finds its roots in the search for a scapegoat for this disaster.

Summary: Hungaray reached some measure of stability from Hegedüs' reforms, but this quickly reversed when they tried to fix exchange rates, leading to speculation, unemployment, inflation, nationalism, and anti-semitism.

Summary: Germany continues to slide as the Reichsbank continues printing at full tilt and Germans can barely buy necessities to survive. The "bale of last straws" was Poincaré's invasion of the Ruhr and the subsequent loss of a significant fraction of Germany's population and industrial and agricultural base.

Summary: Germany, under Dr. Havenstein at the Reichsbank continued printing money in greater amounts and allowed her gold reserves to dwindle to fund imports of coal and food. Workers demanded to be paid daily to keep up with inflation.

Summary: Hyperinflation continued, with prices printed daily now in the newspapers. Unrest became increasingly violent and riotous, and Cuno was pushed out of office as Chancellor.

Summary: Havenstein of the Reichsbank is the fool-villain of this tale. He did not believe in a connection between the money supply and price levels or exchange rates, and saw his duty as supplying enough paper as medium of exchange to meet the demands of the mark's tumbling purchasing power. National unity dissolved and was replaced with the extremes of Hitler, Communism, and looting. Finally a military dictatorship was declared.

Chapter 12: The Bottom of the Abyss

Summary: "Inflation is the ally of political extremism, the antithesis of order" (201). The country continued to fall apart politically with von Kahr in Bavaria, outrage of the socialists, lawlessness in the Rhineland, and victories by the communists and Hitler. Men cared not for democracy when basic needs were unmet and looked for any strong hand. Ignorance, greed, and cowardice led to dictatorship, hunger, and bloodshed.

Summary: Germany is saved by Havenstein's death and the stopping of the money printing, and Hjalmar Schacht's elevation and switch to the Rentensmark. The Rentensmark was a confidence trick, but it worked and farmers released food in exchange for it to the starving cities. Sanity was returning—including a balanced budget in March 1924, but the reckoning with reality was still ahead.

Summary: Stability was restored but at the cost of high interest rates, bankruptcies, and unemployment. Food was now abundant and cheap but still largely unaffordable. Hyperinflation had massively redistributed Germany's capital.

Chapter 15: The Wounds are Bared

Summary: The insidious consequences of inflation persisted long after the recovery, and ultimately sowed the seeds for future conflict in World War II. Inflation permanently warped people's views and attitudes toward money and debt, destroyed the middle class, and led to a widespread moral breakdown.

Summary: Inflation reminds us that the world wars were a single story. And this story teaches us about the importance of sound money and its purpose in serving a free society.