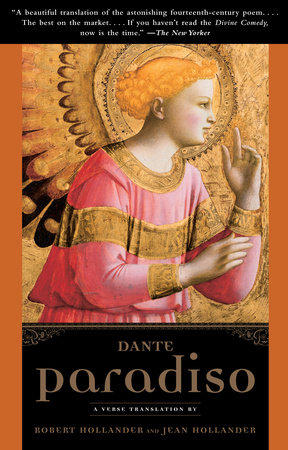 The glory of Him who moves all things1
pervades the universe and shines
in one part more and in another less.
–Paradiso Canto 1. 1-3

As I gazed on her, I was changed within
–Paradiso Canto 1. 67

to reach for angels' bread, which gives us life on earth,
yet never leaves us satisfied
–Paradiso Canto 2. 11-12

I shall now reshape your intellect,
thus deprived, with a light so vibrant
that your mind will quiver at the sight.
–Paradiso Canto 2. 109-111

Observe well how I pass along this way
to the truth you seek, so that in time
you may know how to ford the stream alone.
–Paradiso Canto 2. 124-126

for the true light that brings them peace
does not allow their steps to stray
–Paradiso Canto 3. 32-33

Brother, the power of love subdues our will
so that we long for only what we have
and thirst for nothing else
...
And in His will is our peace.2
–Paradiso Canto 3. 70-72, 85

Assuredly I have set it firmly in your mind
that a soul in bliss could never tell a lie,
since it is always near the primal Truth.
–Paradiso Canto 4. 94-96

I now see clearly that our intellect
cannot be satisfied until that truth enlighten it
beyond whose boundary no further truth extends.
–Paradiso Canto 4. 124-126

fix it in your memory, for to hear
and not remember does not lead to knowledge
–Paradiso Canto 5. 41-42

You have the Testaments, both New and Old,
and the shepherd of the Church to guide you.
Let these suffice for your salvation.
–Paradiso Canto 5. 76-78

Many a time have children wept
for the father's sin, and let him not think
that God will change His ensign for those lilies.
–Paradiso Canto 6. 109-111

Differing voices make sweet music.
Just so our differing ranks in this our life
create sweet harmony among these wheels.
–Paradiso Canto 6. 124-126

Sin alone is what enslaves him
–Paradiso Canto 7. 79

Now what was behind you is before you.
–Paradiso Canto 8. 136

God sees all, and your sight is so in-Himmed
–Paradiso Canto 9. 73

[God] made with such order all things that revolve
that he who studies it, in mind and in space,
cannot but taste of Him.
–Paradiso Canto 10. 4-6

Now think what kind of man it took
to be a fit companion to maintain
the steadfast course of Peter's bark upon the sea
–Paradiso Canto 11. 118-120

Nothing is worthy to rhyme with Christ:

He seemed indeed a messenger and intimate of Christ,
since the first love made manifest in him
was for the initial precept taught by Christ
–Paradiso Canto 12. 73-75

Let the people, then, not be too certain
in their judgments, like those that harvest in their minds
corn still in the field before it ripens.
–Paradiso Canto 13. 130-132

He seeks the root of still another truth
–Paradiso Canto 14. 12

words so profound I could not understand them
–Paradiso Canto 15. 39

Our affections are ephemeral
–Paradiso Canto 16. 3

It is more modest to be silent than to speak
–Paradiso Canto 16. 45

The point that holds all time
–Paradiso Canto 17. 16

That lady, who was leading me to God
–Paradiso Canto 18. 4

From feeling more delight in doing good
a man becomes aware from day to day
of his increasing virtue.
–Paradiso Canto 18. 58-60

And thus it is clear that every lesser nature
is too small a vessel for that goodness
which has no limit, which is measured by itself alone.
–Paradiso Canto 19. 49-51

There they shall see the sorrow brought upon the Seine
by one who falsifies his country's coin
and who will die assaulted by a boar.
–Paradiso Canto 19. 118-120

The sky, lit up before by him alone,
suddenly sparkles with a multitude of lights
which all reflect as single one.
–Paradiso Canto 20. 4-6

Such did that image seem to me, the very imprint
of the eternal Beauty, by whose will
all things become that which they truly are
–Paradiso Canto 20. 76-78

In this good is our good perfected,
for that which God wills we will too
–Paradiso Canto 20. 137-138

The flesh of mortals is so weak and dissolute
that good beginnings go astray down there, undone
before the newly planted oak can bring forth acorns
–Paradiso Canto 22. 85-87

Then they remained there in my sight,
singing Regina celi with such sweetness
that my feeling of delight has never left me.
–Paradiso Canto 23. 127-129

For the world to have turned to Christ,
I said, without miracles, that indeed was one
to outdo all others more than hundredfold.
–Paradiso Canto 24. 106-108

Video: "Virtue forges a certain and sure connection between us and our final end"

Hope, I said, is the certain expectation
of future glory, springing
from heavenly grace and merit we have won.
–Paradiso Canto 25. 67-69

I love the leaves with which the garden
of the eternal Gardener is in leaf
in measure of the good He has bestowed on them.
–Paradiso Canto 26. 64-66

To the Father, to the Son, and to the Holy Ghost,
glory, cried all the souls of Paradise,
and I became drunk on the sweetness of their song.
–Paradiso Canto 27. 1-3

Ravenous wolves in shepherds' clothing
can be seen, from here above, in every pasture.
O God our defender, why do you not act?
–Paradiso Canto 27. 55-57

Understand its motion is so swift
because it is spurred on by flaming love.
–Paradiso Canto 28. 44-45

See now the height and breadth of the Eternal Worth,
one light, which shines dispersed among
so many mirrors yet remains
in Itself one, just as It was before.
–Paradiso Canto 29. 142-145

The beauty that I saw transcends
all thought of beauty, and I must believe
that only its maker may savor it all.
–Paradiso Canto 30. 19-21

Let your sight fly through this garden,
for seeing it will help prepare your eyes
to rise, along the beam of holy light.
...
Rather to the highest circles raise your eyes
so that you may behold the queen enthroned,
her to whom this realm is subject and devout.
–Paradiso Canto 31. 97-99, 115-117

In this case, let the fact suffice
–Paradiso Canto 32. 66

Your womb relit the flame of love
–Paradiso Canto 33. 7

Here my exalted vision lost its power.
But now my will and my desire, like wheels revolving
with an even motion, were turning with
the Love that moves the sun and all the other stars.
–Paradiso Canto 33. 143-145