The Drama of Atheist Humanism by Henri de Lubac 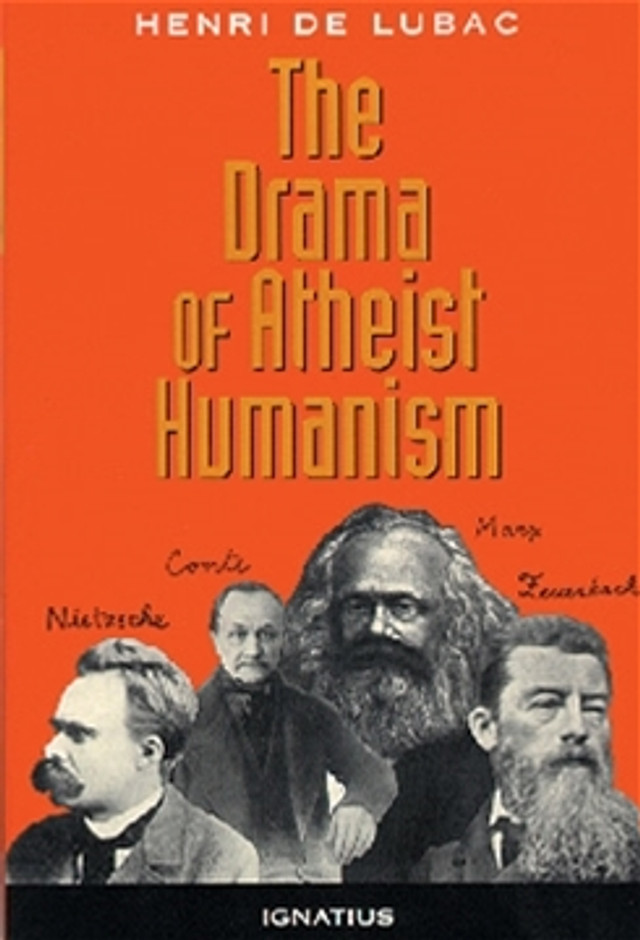 Christianity puts forth a radical (to the ancients) view of man: both low in his fallenness and great in his redemption. But this liberation eventually started to feel like a yoke, leading to the atheism (really anti-theism) of absolute humanism.

2. Feuerbach and the Religious Illusion

Feuerbach is the link from Hegel to Marx. For him God is only the sum of the attributes of the greatness of man, and is then cast off. His goal is to reveal man's essence to give him faith in himself. Marx then takes the religious ideas of Feuerback and applies them to the social and political order, which has no God because it seeks to restore divinity to man.

3. Nietzsche and the "Death of God"

Nietzsche proclaimed the death of God as an act of the will—a murder—that urges man to greatness.

4. The Dissolution of Man

1. The Birth of Tragedy

Nietzsche wrote his first work, The Birth of Tragedy, against the "myth-destroying" rationalism of Socrates. Man starved of myths is a man without roots.

The Church affirms Nietzsche's intuition that we need something deeper than cold rationalism, but rejects his pagan myth for Christian mystery as explained by Péguy.

Nietzsche and Kierkegaard both reject the rationalist "historicism" of Hegel. Kierkegaard is quite Socratic and he sees Christianity as a paradox (though he cannot be considered a teacher of the faith).

Summary: Today's problems are spiritual in nature, and involve the very concept of man.

Nietzsche directly rejected Christian ethics and a Christian concept of man. His attack is spiritual, and leads to the neopaganism of our age.

We must recognize our own shortcomings in living the Christian life and return to the spirit of Christianity: The Gospels.

Chapter 1: The Meaning of Comtian Atheism

1. The Law of the Three States

Compte's whole system can be viewed as the transition from the theological (fictitious) state, to the metaphysical (abstract) state, to the scientific (positive) state. This was his "law of intellectual evolution." This reduces man to no more than the subject of sociology.

Monotheism is deplorable to Compte, and he mourns the "Western malady" that has occurred. Rather, he celebrates the "underlying kinship between positivism and fetishism."

Compte leaves the "inadequate emancipation" of atheism behind: it is a purely negative system that cannot satisfy the moral and social needs the faith is denies does. We are left with the only one absolute principle: "everything is relative."

God must be replaced if you don't want him to come back. Positivism replaces God with Humanity: it is the "Religion of Humanity."

Christian anthropology—the human person made in the image and likeness of God—makes the individual more important than the community.

Compte disparaged Jesus at every opportunity, but was enamored with "the incomparable Saint Paul."

3. The Work of the Catholic Priesthood

Compte admired the "social genius" of Catholicism, for example how the Catholic priesthood allowed for the separation of temporal and spiritual power. He saw Catholicism, in its "divinization" of man, as paving the way for Positivism as the Religion of Humanity.

Compte saw Catholicism as an ally against, for example, Protestantism. He attempted—no joke—to lure some Jesuits into a coup against the Church.

Compte admired aspects of Catholicism and modeled certain aspects of his Positivism after it. This cannot be taken seriously, however, as it grew out of his senility and his fundamental misunderstanding of the Gospel.

2. The Priesthood of the Scientists

Compte sought to create a Positive Priesthood—a "Priesthood of Humanity"—composed of scientists who would establish his order.

Compte saw no place of anything but blind faith and veneration from the followers of his Positivism, who would submit to any doctrine from his Priests, and ultimately to whatever he thought himself.

In Compte's Positivism, politics and religion are combined into a single "Sociocracy", with no concept of rights and all spiritual and temporal power concentrated. Interestingly, his primary men of action are to be bankers.

Dostoevsky and Nietzsche both descended to the same depths of despair, and their response is what determines which of them is the real prophet of our time. It was Dostoevsky who chose God, and who's questions shake us out of our complacency and help us to understand him more fully.

2. The Torment of God

Dostoevsky enters into the depths of atheist doubt, as illustrated by his reaction to Holbein's painting of the dead Christ. He enters the depths of denial as with the Problem of Evil from the mouth of Ivan in The Brothers Karamazov, and while he does not provide answers, he shows how Jesus entered into our suffering and took evil upon his shoulders.

3. In the Presence of Jesus

While Nietzsche was jealous of Jesus to the point of madness, Dostoevsky encountered Christ in the Gospel in prison through knowing him comes to a deep understanding of the human person.

Chapter 2: The Bankruptcy of Atheism

Against the man-God (Jesus), Dostoevsky represents the god-man—the practitioner of atheist humanism—in characters such as Kirillov who kills himself to kill the fear of death and thus to kill God.

2. The Tower of Babel

The Tower of Babel represents atheist socialism. Against this, Dostoevsky shows that social systems with no Christian basis inevitable become systems of violence and slavery.

3. The Palace of Glass

Atheism built a "Palace of Glass", the universe of reason. But this inevitably becomes instead a palace a dark jail, and Dostoevsky ridicules those who allow themselves to become the slaves of science or philosophy. The "subterranean man" from _Notes from Underground_ shows man's freedom against the determinism of scientism. Man cannot live without God.

Dostoevsky's holiness is ambiguous? This section didn't really click with me...

Dostoevsky places parts of himself in his characters, and this along with his ambiguity is important to understand him.

Dostoevsky is profoundly Orthodox and shows how the ways in which God reaches man are a mystery. The Brothers Karamazov has the mysticism of the Resurrection.

Chapter 1: The Search for a New Man

How does a Christian respond to all the world's hope for a "new man"?

Nietzsche's thought is everywhere today, but even in his tragic blindness he is a prophet