The Pillars of the Earth by Ken Follett

aliases: ["The Pillars of the Earth"]

The Pillars of the Earth: A Novel by Ken Follett 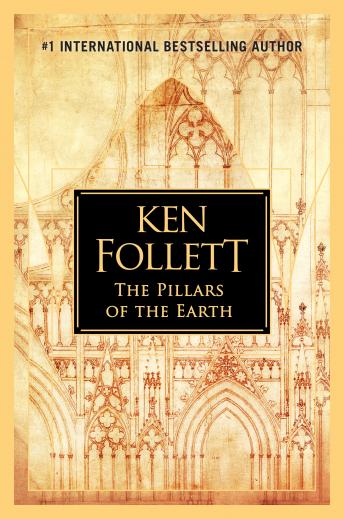 The Pillars of the Earth is a story about the construction of a cathedral in fictional 12th century Kingsbridge, England. It is an epic of rivalry, romance, defeat, challenge, and ultimately beauty. It is the coming of age story of Tom Builder, Prior Philip, Jack the stone carver, as the community seeks its place in a changing and challenging world. The story is enthralling and has reawakened my fascination with architecture and the Middle Ages.

As the novel opens, Tom Builder—without work and destitute—finds himself at the Kingsbridge Priory. When the old church is destroyed by fire, Prior Philip hires him as master builder for the construction of a new cathedral. The story unfolds over several decades as Philip oversees the construction effort against a backdrop of political scheming among the bishop, Hamleigh family, and others seeking to impede Kingsbridge and buttress their own power. The story and characters are compelling in their own right, and the novel is all the more interesting thanks to the detailed descriptions of monastery life and cathedral construction.

In the preface to Pillars, Ken Follett describes some of the detailed research he undertook to write the novel, which included reading the likes of Jean Gimpel, the French historian and medievalist, and Nikolaus Pevsner, the German-born British historian of architecture. Starting with these, I went on to read Gimpel's The Medieval Machine: The Industrial Revolution of the Middle Ages and Pevsner's classic An Outline of European Architecture, both of which are excellent for putting the Medieval period and architecture, respectively, in broader context. The Medieval Machine reviews the impressive range of technologies developed in the period that enabled cathedral building as well as providing for the general prosperity that made them economically feasible. Pevsner gives a broad history of architecture in Europe, moving from classical to Romanesque, Gothic, Renaissance, Baroque, Romantic, and Modern: this serves to situate the Gothic cathedrals in the larger sweep of architectural development.

My interest in several works I have read since Pillars has its roots in the story of the Kingsbridge cathedral. Cathedral: The Story of Its Construction by David Macaulay is a children's book with excellent illustrations that help build an understanding of Gothic cathedral design and construction. How to Read Churches: A Crash Course in Ecclesiastical Architecture by Dennis R. McNamara is a short overview of the history and elements of church buildings, also with excellent illustrations. The twin themes of Medieval monastic life and architectural development led me to Umberto Eco's The Name of the Rose, a mystery set in a 12th century Italian abbey, and Campbell's The Library: A World History, a tour of libraries through the ages accompanied by stunning photographs. Finally, Universe of Stone by Philip Ball gives a colorful introduction to Gothic architecture by focusing on one of its gems: Notre Dame de Chartres. Still on my list to continue learning about Gothic architecture are The Cathedral Builders by Jean Gimpel, The Gothic Cathedral* by Christopher Wilson, and Understanding Architecture by Leland M. Roth and Amanda C. Roth Clark.

The Gothic style is made distinctive by three main elements: pointed arches, flying buttresses, and rib vaults. However, Pevsner notes that "The features which make up the Gothic style are well enough known, too well in fact, because most people forget that a style is not an aggregate of features, but an integral whole".1 The "integral whole" Pevsner speaks of is what makes Gothic architecture—and the culture that produced it—so impressive. Christian society in the High Middle Ages comes to life and remains with us today in the great Gothic cathedrals. Light breaks through immense stained glass windows, literally shining through the saints to illuminate the darkness within. Starting with the main piers, large as trees, moving upward into the brightness of the clerestory, and extending to the highest point in the vaulted ceiling, the eye is drawn upward to heaven. As Philip Ball explains, “Gothic churches display, in a way that Romanesque does not, an overarching vision: a sense of wholeness and coherence.”2 Walking through a Gothic church is a sacramental experience.

In early 2017 I visited Paris to see for myself. I started where much of the Gothic story starts, at St. Denis. This abbey church (now cathedral) is the first to exhibit all the elements of Gothic construction, and its Abbot Suger wrote a small book about the rebuilding of the church in the Gothic style. From there I went to Notre Dame de Paris, getting there in late afternoon and staying for vespers with beautiful hymns in Latin and French. Having spent some time in Paris I have to agree with Peter Abelard: “I turned my face towards Paris and the thrill of this happy pilgrimage compelled me to confess: ‘Truly the Lord is in this place, and I knew it not.’ It came to my mind how the poet said: ‘A happy thing is exile in such a place as this.’”3

The next day I journeyed to Notre Dame de Chartres, a masterpiece of Gothic architecture. Restoration work was underway and most of the ceiling had been recently renovated, bringing a brightness to the immensity of its interior space. I climbed hundreds of spiral stairs up into the north tower, which rises to 377 ft. The view was incredible, as was the ability to see the inner workings of such a feat of engineering.

Visiting these great cathedrals is something that can only be experienced, something I hope to do many more times. Short of this, Ken Follett in Pillars of the Earth approaches the grandeur of their existence.

Gothic churches display, in a way that Romanesque does not, an overarching vision: a sense of wholeness and coherence.
- Philip Ball