Aftermath: Seven Secrets of Wealth Preservation in the Coming Chaos by James Rickards 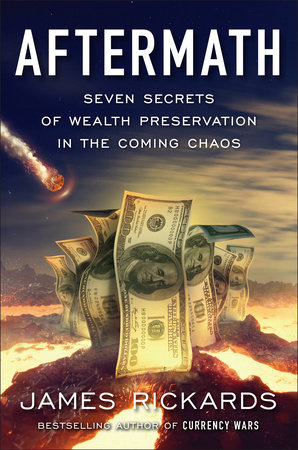 Summary: Investors should prepare for a more mercantilist (less globalist and free trade) world in which trade surpluses and gold accumulation are ends in themselves. Acquire gold and silver, invest in gold and silver mining companies, and invest in companies with a strong domestic market (Boeing, SolarWorld, Mission Solar, Nucor, U.S. Steel, GM).

Chapter 2: Putting Out Fire with Gasoline

Summary: Prepare for sustained slow growth by 1) reduce exposure to high-growth tech stocks, i.e. FAANG, 2) allocate part of your portfolio to sectors that perform well in low-growth/deflationary environments such as utilities, 10-yr US Treasuries, high-quality municipal bonds, and 3) increase your cash reserves to protect against deflation and give you optionality. This slow-growth portfolio provides steady yields, hedges deflation, avoids losses on highfliers, and offers a chance to bottom fish in the next recession or crash.

Chapter 3: Find the Cost of Freedom

Summary: Don't blindly follow the choices provided to you by the financial industry, and reduce your exposure to products promoted by them. Instead consider income-producing real estate, natural resources, museum quality collectibles, and other asset classes not available in 401(k)s. Don't max out your 401(k) but rather save some to invest elsewhere.

Summary: Diversify away from exchange traded products. Allocate 30% to cash to reduce portfolio volatility and give you the ability to shop for bargains in the aftermath of a crash. Allocate 10% to physical gold allocation to ensure against inflation or account freezes and exchange closures. Allocate 10% to private equity and venture capital in firms where you know the founders and operators, providing upside and diversification away from market trends.

Chapter 6: The Mar-a-Lago Accord

Summary: Investible assets exclude home equity, business equity, and other illiquid or intangible assets, and you should allocate 10% to physical gold in safe, non-bank storage. Using an example portfolio of 10% gold, 30% cash, and 60% equities. In scenario 1, if gold declines 20% your overall portfolio decreases 2% and is offset by equity performance. In scenario 2, if equities decline 85% and gold gains 650% (predicted $10k/oz gold price), you lose 50% on stock and gain 65% on gold and your wealth is preserved or increased, and the cash.

Summary: The best time to buy gold is now before the next crisis hits.

How did you go bankrupt?
Two ways. Gradually and then suddenly.
–The Sun Also Rises by Ernest Hemingway

The best depiction of life after a financial collapse is found in The Mandibles, a brilliant 2016 novel by the award-winning author Lionel Shriver. The novel offers details of an economic collapse in 2029, but is mostly concerned with the lives of everyday people living in the aftermath, Like Anthony Burgess, Shriver invents words and phrases as needed to convey the unfamiliar. She uses Stone Age to describe a power-grid collapse that preceded the financial crash, and Dryout to describe water scarcity in urban areas.

What is eerie about The Mandibles is not that life is apocalyptic, as in The Road, nor that life is normal, as Wall Street cheerleaders would have it, but that it's a mixture of both. The United States has defaulted on its debts and is relying on the Federal Reserve to print money to cover interest and principal payments. A new global reserve currency, the bancor, has been launched, but the United States is excluded from this currency system. The Mexican-born U.S. president Alvarado, who delivers his speeches in Spanish, confiscates all private gold in America, a replay of FDR's gold confiscation in 1933. Hyperinflation is 30 percent per week (something I've experienced firsthand traveling in Turkey), so barter is gradually replacing money. Stores still exist, but the shelves are mostly bare. Shoppers don't buy what they want (it's not there); they buy what others may want in the future (hardware and the like) so they can barter it for food. Police are on the streets, but they work for bribes from residents and ignore crimes perpetrated on nonbribers. Routine jobs are still around, but elite occupations in the professions and academia are being eliminated to cut costs. This results in the formerly richest members of the Mandible clan moving in with their poorer relatives, who still have a roof over their heads.

One of the recurring themes in The Mandibles consists of elites who insist that the economic collapse is temporary and the economy will soon bounce back as it did after their Stone Age and indeed after the Great Depression. Except in Shriver's world there is no bounceback; the economy keeps getting worse. Those who cling hardest to recovery chimera end up losing the most. Shriver describes a government plan to eliminate cash in order to crush the black market economy, something Ken Rogolf and Larry Summers endorse today. Some rich Americans survive, but they confine themselves to luxury bunkers prepared before the crisis. Shriver includes a grisly scene in which two of the Mandibles enter one of these bunkers. It turns out that no one killed the rich; they killed each other. Book reviews for The Mandibles were largely positive except for one negative review in The Washington Post, unsurprising since Shriver has D.C. firmly in the crosshairs of her sniper wit.

While The Mandibles has been labeled dystopian, futuristic, and even science fiction, it is actually a realistic portrayal of a postcollapse economy. The day-to-day trials of Shriver's characters would be familiar to civilians behind the lines in the Civil War or getting by in the Great Depression. Those who assume such scenarios won't happen again put too much faith in central banks and too little in the study of history.

Most plans for catastrophe will fall apart in the first five minutes of being needed. Washington, D.C., Beltway traffic is bumper to bumper on a good day. The idea that one could evacuate D.C. in an automobile on short notice is absurd. The superrich have their hideaways in New Zealand. Sounds good, but the tycoons have spent more time picking out a location than they have asking if they can even make it to the airport, whether the airport is operating when they get there, where they can refuel their private jets en route, and whether the Kiwis will be waiting at Auckland Airport with troops if they make it that far. The more blue-collar approach of semiautomatic rifles, stacks of ammo, and cases of freeze-dried food won't fare much better. The bunkers of these wannabe Rambos will be overrun by pop-up militias in minutes, albeit with casualties. A simple device like a bicycle will be more valuable than bullets when the time comes.

This is the point Shriver makes in the climax of her novel. The beleaguered Mandibles decide to leave Brooklyn, where they lately gathered to begin a long march to Gloversville, New York, a small town northwest of Albany in the Adirondack foothills. There a Mandible relative, Jarred, had moved earlier to buy a farm. Jarred developed a survivalist instinct in advance of the meltdown's worst phase, yet his farm was not a bunker, it was a working farm with fruit trees, vegetables, and livestock. He let his extended family know that if they could make it to the farm, he had plenty of need for help and would share the food and shelter. The Brooklyn Mandibles make the trek and, in the end, survive.

The key to survival in a true collapse is not a bunker, rifle, or private jet. The key is community. You will not survive on your own, yet you might just survive in a community that is prepared to share food, fresh water, labor, and artisanal skills. Your skill as a carpenter, dentist, or field hand might be richly rewarded with corn, cheese, milk, and bacon. Cities will break down faster than surrounding countryside because of overreliance on electricity and transportation networks, and their vulnerability to riots, looting, and violent crime. Shriver describes a Brooklyn housejacking that is scary and surreally funny at the same time.

Yet long after cities become uninhabitable, the countryside can function relatively smoothly. This is not the result of weapons, but the result of community. Neighbors will look out for neighbors. Those in need will hire those with skills. Output will stabilize and prices will be steady. The way to envision this is not the barren landscape of McCarthy's The Road, but small-town life circa 1901 in Grover's Corners, New Hampshire, as portrayed in the play Our Town by Thornton Wilder. For George Gibbs, the boy next door in Our Town, as for Jarred Mandible in The Mandibles, a farm is more important than a college degree.

What about money and wealth preservation? Both Grover's Corners in 1901 and Shriver's Gloversville in 2029 had money. In Grover's Corners, it was silver coins of gold-backed banknotes. In Gloversville, it was gold and silver bullion, gold-backed notes, or simple barter. What was not money was what we call money today—fiat currency printed by the Fed. In both places, wealth came down to tangible assets and your skills as a laborer, artist, or entrepreneur. Another form of wealth that carries no weight in Grover's Corners or Gloversville is stocks and bonds. This reality is nicely captured by Shriver in a rant by a professor whose portfolio was wiped out in the crash:

All those pension funds with pie charts of 62 percent equities and 27 percent bonds. ... All the investment accounts with their contrasting strategies of "growth" or "income."…. The solicitous questionnaires from Morgan Stanley about the degree of "risk" you'll tolerate- questionnaires that tend to play down the fact there's nowhere on the form to check "zero." ... The "large cap versus "small cap" versus "emerging markets."... The delicate tweaking. Maybe we should move a little more into the energy sector and de-emphasize pharma Well, all of those accounts have been flattened. The strategies didn't matter.

In other words, hard assets and hard work are the only stores of value. Stocks and bonds will be worthless because the companies will collapse, the debtors will default, and the nominal value of whatever is left will be wiped out by inflation. The game may start over, but existing players are wiped off the board.

This is not to say that one should not hold stocks and bonds today alongside hard assets. The point is to stay alert and be nimble as conditions deteriorate and risks rise. The time will come in the not distant future when quick decisions will need to be made first to pivot from securities to cash and later from cash to gold …. and maybe a farm.

Shiver ends The Mandibles with a revelation by the then oldest member of the family, who rescues the clan with a gift of the one form of money that survived the chaos against all odds, hidden in a box. I won't ruin the surprise by saying what's in the box. But, if you know my writings, you can probably guess.