My Brother the Pope by Fr. Georg Ratzinger, Michael Hesemann 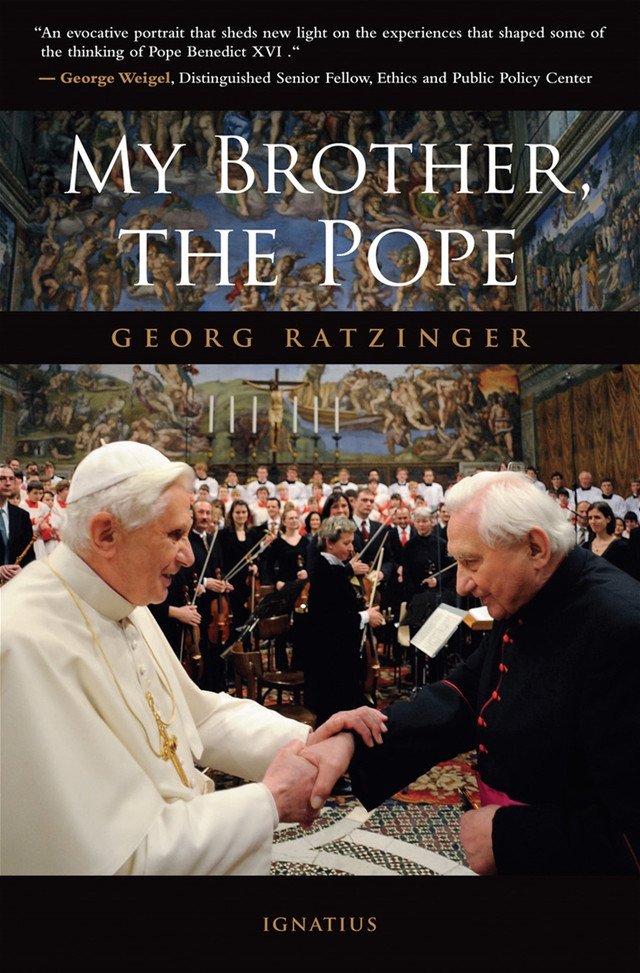 I spent the week after Pope Benedict's passing reading this beautiful memoir his brother wrote about their lives together. The portrait of the Ratzinger's early life reads like an instruction manual for how to raise saints (and popes!): prayer and the liturgy was central to their family life, and it was natural for them to envision themselves as priests. The closeness of the family throughout their lives is beautiful: parents living with their children in their old age, their sister living with Joseph in Rome, and when finally it was just the two brothers left their continued devotion to each other. The Joseph Ratzinger displayed by his brother is kind and sensitive and docile to the Lord's will.

Summary: The roots of the young Ratzinger family.

Summary: Joseph is born, and this tells of the spirituality of their young family.

This piety, which was lived and put into practice, defined our whole life, even though today I celebrate only one Mass and refrain from going to a second one. Nevertheless, it was imparted to us as children in the cradle, so to speak, and we remained faithful to it throughout our lives.

I am convinced that the lack of this traditional piety in many families is also a reason why there are too few priestly vocations today. Many people in our time practice a form of atheism rather than the Christian faith. In some respects, they may maintain a sort of vestigial religiosity; perhaps they still go to Mass on the major feast days, but this rudimentary faith long ago ceased to permeate their lives, and it has no bearing on their everyday routine. It starts with sitting down at table and beginning a meal without even thinking about prayer, and it ends with no longer coming to church regularly on Sundays. Thus, an almost pagan way of life has taken root. If there are no religious practices even in family life, then this has an effect on all the rest of human life. I often speak with brother priests, and in almost all cases it seems that they prayed regularly as a family and went to Mass together. This then shaped their whole lives and directed them toward God. Thus, their vocation fell on fertile soil.

Summary: The family moved to Tittmoning until just before Hitler came to power, when they had to move.

The driver stopped, and the door did not open until Father, as the police officer of the place, who on this occasion wore his freshly cleaned uniform with polished saber, helmet, and belt, finally opened it wide. Then the Cardinal climbed out with great dignity and surveyed the crowd with a majestic glance. That made an extraordinary impression on us all, while my brother laconically noted, "I'll be a cardinal someday!" A few days later, our apartment was painted. The painter did the job so skillfully that my brother at first watched, utterly fascinated, and then announced to us: "I'll be a painter someday, too." (68)

Summary: The Nazis commence their takeover of everyday life, including the schools. Joseph makes his first communion.

Summary: Joseph father retires from the police force, and the family moves to a simple farmhouse in Traunstein which becomes the family home.

Summary: Due to the war the brothers are at the same stage academically and enter the seminary and are ordained priests on June 29, 1951.

Summary: Ratzinger is shocked to be appointed Archbishop of Munich and Freising, appointed a cardinal three months later by Pope Paul VI, and then summoned to Rome by John Paul II.

For again, as always in his life, it was someone else who led him where he really did not want to go. When Benedict XVI celebrated his first Mass as pope on the morning of April 20, 2005, he remembered his beloved predecessor once again. After the cardinals had elected him, he said, "I seemed to see his smiling eyes and hear his words, at this moment addressed specifically to me, 'Do not be afraid.'" A strong hand was clasping his and was now driving him on to complete what John Paul Il began: a Church that, according to Christ's teaching and example, "looks serenely at the past and is not afraid of the future".

Five days later, in his address to the German pilgrims who had come to his installation, he became even clearer and chose a telling metaphor: "When, little by little, the trend of the voting led me to understand that, to say it simply, the axe was going to fall on me, my head began to spin. I was convinced that I had already carried out my life's work and could look forward to ending my days peacefully. With profound conviction I said to the Lord: Do not do this to me! You have younger and better people at your disposal, who can face this great responsibility with greater dynamism and greater strength.

"I was then very touched by a brief note written to me by a brother Cardinal. He reminded me that on the occasion of the Mass for John Paul Il, I had based my homily, starting from the Gospel, on the Lord's words to Peter by the Lake of Gennesaret: 'Follow me!' I spoke of how again and again, Karol Wojtyla received this call from the Lord, and how each time he had to renounce much and to simply say: Yes, I will follow you, even if you lead me where I never wanted to go. This brother Cardinal wrote to me: Were the Lord to say to you now, 'Follow me', then remember what you preached. Do not refuse! Be obedient in the same way that you described the great Pope, who has returned to the house of the Father. This deeply moved me. The ways of the Lord are not easy, but we were not created for an easy life, but for great things, for goodness." (232-233)