The End and the Beginning: Pope John Paul II—The Victory of Freedom, the Last Years, the Legacy by George Weigel 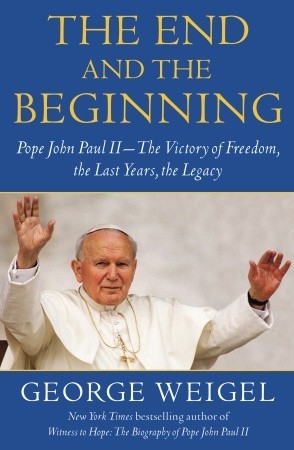 I spent 2018 through 2020 reading William Manchester's The Last Lion trilogy on Churchill, and am now for 2021 through 2023 reading Weigel's trilogy on John Paul II. The first installment, Witness to Hope was an epic journey. This second installment, The End and the Beginning, starts with a recap of Karol Wojtyła's life to date. But the primary focus is on the buildup to the Great Jubilee of 2000 and his last years, as well as a comprehensive look at the accomplishments and frustrations of his pontificate.

Weigel emphasizes the same themes of John Paul's pontificate: especially the "law of the gift" (48, 355), how the church proposes but never imposes (437), and the Christian humanism he so consistently preached (517).

Sitting here in 2022, there are many lessons we can draw from his life. The teachings of the Church are perennial and timeless. John Paul preached these unchanging truths in a way that addressed the particular challenges of his (and still our) time. Interpreting and implementing Vatican II is a massive work that John Paul II focused much of his energy on, but that work is not complete. We are the generation charged with implementing Vatican II1.

John Paul II also warns Europe about the consequences of abandoning its Christian roots (334). At stake is our entire culture, including especially the Christian tradition of human rights. Events since his death make this warning all the more important and all the more general: the challenge is certainly not isolated to Europe.

Part I: Karol Wojtyła vs. Communism

Defender of the City, traditional role of the bishop of Krakow

Summary: John Paul II is elected Pope and confronts the communist regime, starting with his pilgrimage back home to Poland.

Summary: John Paul II witnesses (and is a key part in) the downfall of communism in Europe.

Summary: John Paul's experience as a Pole showed the importance of the immersion in anniversaries as a reclamation of the past as a platform from which to launch the future.

Summary: Evangelization in the great jubilee.

Summary: Duc in altum—Put out into the deep! (cf. Lk-05) to move beyond institutional maintenance and into the new evangelization.

Summary: The dark days of world and personal suffering.

Summary: John Paul II lived his mission to the end, even at the cost of embarrassment as his health failed.

Summary: A view of the life of John Paul II through the lens of the virtues he lived.

Chapter 11: The Measure of a Pontificate

Summary: An evaluation of the accomplishments and shortcomings of John Paul II's pontificate.

The understanding of the third millennium as a privileged moment of grace in which the Church could reexperience itself as a communion of disciples called to a new evangelization of the world; the personalist Christology according to which Jesus Christ reveals both the face of the merciful Father and the truth about our humanity; the notion of a Law of the Gift, built into the structure of moral choice and action, as the royal road to human fulfillment; solidarity as the key to living freedom nobly in free and virtuous societies; the revelatory iconography of our embodied ness and complementarity as male and female—these signature themes of the pontificate reflected a uniquely Wojtylan synthesis of Catholic thought and practice, and a crucial set of keys for interpreting the event at which the twentieth-century Catholic renewal reached its dramatic watershed, the Second Vatican Council.