Witness to Hope: The Biography of Pope John Paul II by George Weigel 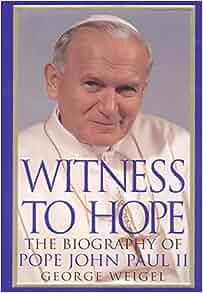 I bought this back in June of 2015 when I was living in LA. I forget why I bought it then but it was perhaps after listening to John Paul II: A Personal Portrait of the Pope and the Man by Ray Flynn. Its great bulk sat on my shelf through three moves while I continued to read some other titles by John Paul II (Rise, Let Us Be On Our Way, Centesimus Annus, Theology of the Body, and The Jeweler's Shop) or about him (Lead Yourself First by Raymond Kethledge, John Paul the Great: Remembering a Spiritual Father by Peggy Noonan and Saint John Paul the Great by Jason Evert). Then at the end of May 2021—with high recommendation from Fr. Dailey—I felt prompted to pick it up and dive in. What an adventure!

I spent 2018 through 2020 reading William Manchester's The Last Lion trilogy on Churchill1, and can now spent 2021 through 2023 reading Weigel's trilogy on John Paul II.

Reading biographies is perhaps the best way to learn history: you can best understand a person by understanding the world they inhabited. Witness to Hope is not only the story of John Paul II, but also a history of Poland's "double defeat" in World War II, the most lucid history of Vatican II and its implementation I have yet encountered, and a fascinating view into the workings of the Holy See.

Being an authorized biography, Weigel had impressive access to interview those close to Karol Wojtyła in Poland and John Paul II in Rome, as shown by the extensive notes to the volume. It's interesting that John Paul II chose Weigel, an American. There must be some bias associated with reading about John Paul II through an American lens, though of course this is the angle I'm most interested in as an American myself.

Karol Wojtyła was formed in the crucible of the two great evil regimes of the 20th century: Nazi fascism and Soviet communism. His perspective on suffering is born of personal experience and his call to "Be not afraid!" carries the moral authority of someone who has stood up to some of the worst evil the human heart has produced. And through his Carmelite spirituality, influenced by St. John of the Cross, he taught and lived the reality of the cross, that suffering is a central part of our human experience.

John Paul II is a great humanist, offering an integrated Christian anthropology to correct the twisted interpretations of the human person offered by modernity. To a world that so often reduces a person to a subject of state control, a consumer in a market economy, or an object of sexual pleasure, he proposes a view of the human person as a moral agent, created as man and woman in the image of God. And our true happiness and fulfillment as human persons is found ultimately in self-giving love.

Now that I am the father of a daughter, I am especially interested in the Christian feminism articulated by John Paul II, focused intensely on Mary as the Mother of the Church and echoing voices such as Edith Stein. This Christian feminism flows naturally from a Christian humanism.

John Paul II believed and taught the priority of culture in forming human societies and writing human history. Culture—not politics or economics—is the driving force of history. The truth of this position is seen in the survival of the Polish people despite the destruction of the Polish state, and has hopeful implications for our situation today: we may not be able to change political or social structures directly, but we most certainly can change the culture, starting with the most basic culture in our families.

Finally, John Paul II is a great inspirational figure. Witness to Hope shows how he inspired millions of people around the world—Catholics and non-Catholics alike. Some of the most holy priests I know point to him as a major figure in the discernment of their vocations. John Paul II has become an influential figure in my life, and Witness to Hope has been an adventure in getting to know him more.

Chapter 1: A Son of Freedom

Chapter 2: From the Underground

Chapter 4: Seeing Things as They Are

Living the Council in Kraków

Chapter 7: A Pope From a Far Country

Chapter 8: Be Not Afraid!

A Pope for the World

Chapter 9: "How Many Divisions Has the Pope?"

Confronting an Empire of Lies

Chapter 10: The Ways of Freedom

Chapter 11: Peter Among Us

The Universal Pastor as Apostolic Witness

Chapter 12: In the Eye of the Storm

Months of Violence and Dissent

The Limits of Politics and the Promise of Redemption

Religion and the Renewal of a World Still Young

Freedom Ordered to the Dignity of Duty

Chapter 16: After the Empire of Lies

Miracles and the Mandates of Justice

Chapter 17: To the Ends of the Earth

Chapter 18: The Threshold of Hope

Appealing to Our Better Angels

Chapter 19: Only One World

Human Solidarity and the Gospel of Life

Beyond a Century of Delusions

To See the Sun Rise