A Church in Crisis: Pathways Forward by Ralph Martin 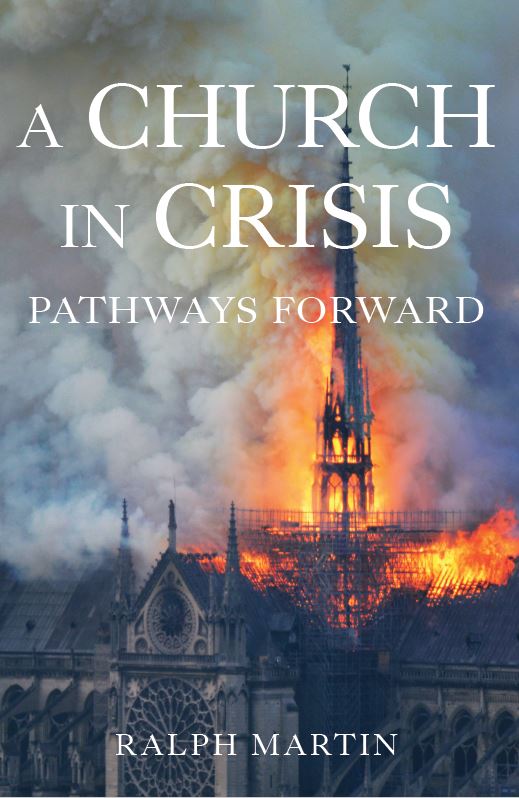 Quick Summary: The Church is in crisis (as usual), and renewal comes through individual turning away from sin and toward God (as usual).

Summary: The Church is experiencing a crisis across many fronts—especially a pervasive attitude of universalism and relativism that minimizes culpability for sin, the backlack from the sexual revolution leading to apostasy as the Church accommodates itself to the world, disordered priorities that deny the Gospel in favor of more attractive secular causes, and pastoral passivity in the face of modernity—all of which has grown recently by what is at best a lack of clarity or at worst a studied ambiguity from Rome. The path forward starts with individual repentance and renewal of our participation in the prophetic mission of Jesus, set aflame by the Holy Spirit.

This book is important, but must be approached with caution. The crisis in the Church is real and must be forcefully confronted, and not used as an excuse to despair or a distraction from the primary solution, which is the pursuit of personal holiness.

Before wading into the crisis I chose to immerse myself in the solution, which is given in his previous book The Fulfillment of All Desire. This was a fruitful choice and it allowed me to examine the crisis with a firmer foundation and a healthy sense of perspective.

Martin presents many historical and contemporary figures as examples of either infidelity to truth or orthodoxy and courage. One challenge, when reading Martin's criticisms of particular writings of these individuals, is to not interpret them as a blanket criticism or endorsement of their work or an assessment of their personal holiness. I was surprised, for example, to see a number of challenging and critical comments about Bishop Barron and Hans Urs von Balthasar. These should be taken for what they are a points of correction pertaining to a portion of what they have said, and not a dismissal of their entire corpus.1 The same applies in reverse to those he praises.

Pope Francis himself is a central figure in the current crisis, and Martin appears to be both firm and charitable in his assessment of the current pope. He recognizes the many good and orthodox aspects of Francis' teaching, while also clearly challenging his ambiguity: "The objective reality is that he is causing and passively accepting immense confusion and division in the Church and seems strangely reluctant to resolve it" (178).

One benefit (and challenge) of this book is the voluminous collection sources: many books and many articles or blogs going into more depth on details of this crisis. A word of caution here as well: there is not enough time in life to study the good things to start off with, and while it is good to be generally aware of elements of the crisis so as to reverse it, the primary focus should be on living in the truth and growing in holiness. This is how Martin closes, and this is the challenge to take up. As such, I will be referring in the future no so much to this book, but much more to The Fulfillment of All Desire.

Because the book has so many references and overlapping themes, I grouped some notes by topic rather than by chapter.

Ralph Martin names many 20th century and contemporary figures as examples of either faithful shepherds or dissenters. A partial list includes:

Part I: A Church in Crisis

Chapter 1: A Time of Confusion and Division

Summary: There is serious confusion in the Church over very important matters of doctrine and morality. Rome is at fault not for directly heretical teaching, but rather for sowing confusion and ambiguity and not offering direct clarification.

Confusion in the Church

Chapter 2: Is There a Solid Place to Stand?

Summary: We need to stand firmly on the foundation of of Scripture, Tradition, and the Magisterium.

Scripture (it all starts here)

Scripture is a fire, a rock, a power, a lifeline, an urgent warning, a privileged communication, a source of life-saving knowledge, the key to happiness, and a profound love letter! (58)

We should devour and treasure God's Word as our most precious possession. "Thy words were found, and I ate them, and thy words became to me a joy and the delight of my heart." (59, Jer-15)

Once we depart from a truly Catholic understanding of the authority and reliability of Scripture and tradition, there is no longer a foundation to stand on, and Christianity has no defense from the cultural pressures of the time that insist that we accommodate ourselves to them. (64)

Chapter 3: Is It All a Game? The Fog of Universalism

Summary: Universalism is the belief that all or almost all will be saved. This has become the default position in parts of the Church, and is dangerous because it minimizes the importance of faith, repentance, and baptism as necessary for salvation, thereby taking the urgency out of evangelization. It also contradicts the insistent message of Scripture and what Jesus' explicit teaching.

The devil's worst and most fatal preparation for the coming of Antichrist is the weakening of men's belief in eternal punishment. Were they the last words I might ever say to you, nothing should I wish to say to you with more emphasis than this; that next to the thought of the Precious Blood (God's merciful suffering for you), there is no thought in all your faith more precious or more needful for you than the thought of Eternal Punishment. —Fr. Frederick Faber, Notes on Doctrinal and Spiritual Subjects, 456 cf. 80

Summary: The sexual revolution is relentlessly pushing on to its extreme conclusion. The primacy of conscience opens the door to massive self-deception. We must respond by living the Gospel fully.

We are being required to accept untruths and even myths to anesthetize the consciences of those engaging in such activities. (111)

How Did We Get Here?

The two issues which I think are most under attack today—the issue of salvation and the issue of sexual morality—I think require us to give clear, truthful answers or to become complicit in affirming our culture in their deceptions and wishful thinking in these areas. It is not loving, kind, or merciful to not tell people the full truth that shows them the path to salvation. (132)

What Should Be Done?

Chapter 5: How Long Will You Straddle the Issue?

Summary: It is problematic to see the Vatican aligning itself with those advancing a new "global humanism" but oppose basic moral teachings of the Church (i.e. Jeffrey Sachs and George Soros) and placing emphasis on "human development" at the expense of preaching the Gospel.

Chapter 6: Is Anyone Responsible?

Summary: There are a lot of people in the church today doing gymnastics making arguments that diminish culpability—especially in the realm of sexual morality—and making people at least perceive that it is "less wrong" or "more alright" that they don't adhere to the law (both natural and of the Church). However, he says that rather than seeking to determine culpability, we should focus on calling everyone to a life of repentance and obedience to God..

Pathways forward that, if followed, can lead us to deep renewal in the Church.

Chapter 7: Seeing and Not Seeing

Summary: We need to stop pretending that things are ok. Non-radical solutions may not be enough to right the ship.

The Church will find her essence afresh and with full conviction in that which was always at her center: faith in the triune God, in Jesus Christ, the SOn of God made man, in the presence of the Spirit until the end of the world. (236 cf. Faith and the Future bib)

Summary: Supernatural forces are at play, and demons are at work in the world.

Summary: Pastoral passivity has been one of the main factors contributing to the crisis of truth in the Church. This passivity has come to mean an accommodation or affirmation of sin, which is not fidelity to the truty.

Our main concern for our children as Christian parents is not losing them for a limited time on this earth but losing them for all eternity out of a deluded sentimentality that makes us afraid to speak the truth in love...If we approve of their immoral activity, we are confirming them on their path to hell. (317)

Chapter 10: The Signs of the Times: Pointing toward Judgment

Summary: God's Judgement is real, and he chastens those he loves.

Chapter 11: A Time for Repentance

Summary: The appropriate response to the situation of the Church today is turning back to God in repentance so that we may undergo his purification.

I believe that it is virtually impossible to be a responsible Christian unless we are making room in our daily lives for prayer and sound spiritual reading, for study of Christian truth, and for contact with others who also want to live fervent Christian lives and serve God faithfully. (381)

Chapter 12: A Time for Action

Summary: We need to be grounded in the truth, intercede for the Church and ask for the guidance of the Holy Spirit, and take action to honor God's Word.

Chapter 13: The Inexhaustible Riches of Jesus: Participating in the Prophetic Mission of Jesus

Summary: We need to focus on imitating Jesus' prophetic zeal and ask for an outpouring of the Holy Spirit to divide truth from falsehood.

There will be division in our hearts, the sword of the Spirit will divide true from false. (436)